JULY 30, 2014 – U.S. Acting Surgeon General Boris Lushniak — a dermatologist whose first action as acting surgeon general was the creation of a report vilifying UV exposure — admitted Tuesday that UV exposure may not be what’s driving an increase in reported skin cancer incidence.

The Washington Post, in an exclusive interview Tuesday, asked Lushniak why the report singles out UV exposure — an odd singularity considering the largest reported increase in skin cancer, by far, is in men over age 50 who seldom tan.

LUSHNIAK:   “From our perspective, the real concern is that this is an increase, and we need to do something about it.”

WASH POST:   “But we don’t know for sure what’s causing the increase?”

LUSHNIAK:   “In essence, we really don’t. …In terms of looking at specific (causes) of that, it’s still difficult to determine.”

The Acting Surgeon General’s 112-page report — produced in conjunction with prominent lobbyists from groups who accept funding directly from the sunscreen industry and are actively lobbying against UV — does not mention that among all the risk factors for melanoma, UV exposure is considered the least-prolific — instead pointing out that it is the main “avoidable” risk factor.

Melanoma researcher Dr. Arthur Rhodes — in a report in the journal Dermatologic Therapy, wrote that overblown sun-avoidance messaging is actually preventing people from learning about the largest risk factors for the disease.

“Unfortunately, as a result of public messages that emphasize the role of ultraviolet radiation (UVR) exposure in tumor development, most general physicians and lay people believe that most if not all cases of CM are the direct result of UVR exposure. In fact, we do not know the case fraction of CM directly attributable to UVR, and the unintended consequences of current messages directly linking UVR exposure and CM development may be thwarting the primary intervention goal of reducing tumor-related mortality,” Rhodes wrote.

He continued, “Public messages related to UVR avoidance and protection as an intervention strategy to prevent CM have been based on circumstantial data and inference rather than clinical trials and sound scientific data. It is by no means obvious that such a common exposure (i.e., sunlight) is the most important underlying cause of a relatively uncommon tumor.”

Putting The Risks of UV Exposure in Proper Perspective: 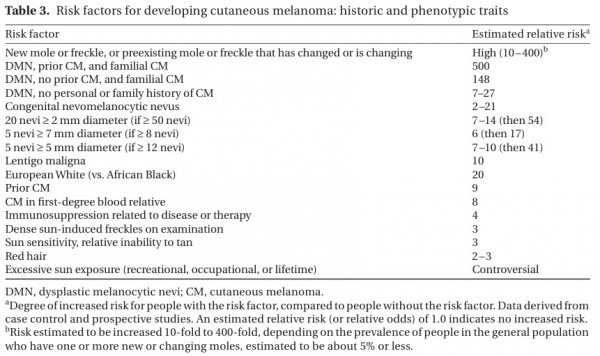